Finally made it to Nhlanguleni this past week and had a chance to get even with my elusive blessbuck from last year.

These guys are moving in a herd about 40 or 50 strong. There are a lot of eyes in that herd and they stay in the middle of open plain… VERY little cover for a stalk. This time, I opted not to stalk, but to sit in a tree, close to the path they travel between two open areas.

However… the buggers kept staying out of any ethical shot range. I knew I was going to need a long shot for them (last year, the best I could get was about 70yds, and just wasn’t confident in it.) but 126yds was so far beyond any shot I would take.

In preparation I had a longer axle-to-axle, Bowtech BT-Mag set up with trusty beestinger stabs and did have a sight tape set to 110yds and practiced in the 80-110yd distances regularly. NOT to take a shot at that distance, but to build my confidence and a steady hand for the 60-80yd shot I expected would be needed.

After a day in the hide (about 12 hours to be honest) I gave up and headed back to our camp. Sun has just dipped below the horizon and I felt the day was done. Oom Pieter then asked if I would be comfortable to still shoot in the dusk light, because he saw 5 animals that broke away from the big herd not to far from our camp. I was confident in the light (about half my practice time was in light like this) so we decided to give it one shot. On first approach, Oom Pieter ranged 52yds, but they felt we are too close to their “safe zone” and moved behind some trees. We made our way around and oom pieter ranged the foremost animal at 62yds. 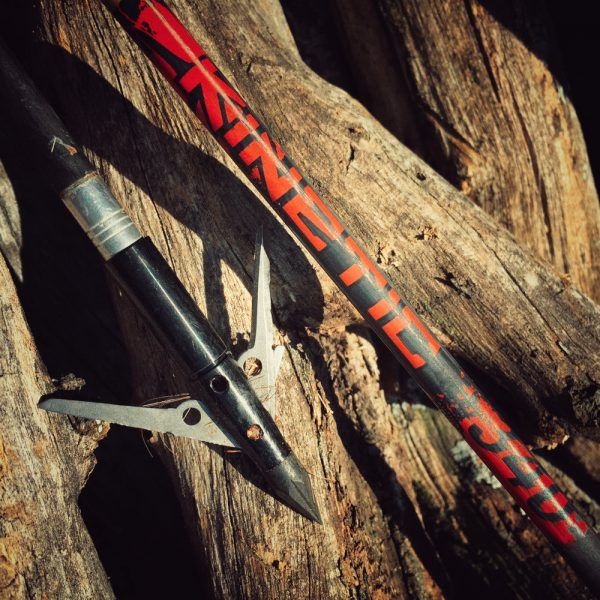 I was about to draw up when she moved, but one behind her stayed with eyes on us. I reset my Sureloc Lethal Weapon to 64yds (no gap shooting for this shot! I wanted to be sure or no shot at all) I knew the Ulmer Edge 125gr point would fly true, so no worries there. Drew up and waited for her to look away. The moment her head moved, I released the shot.

The one thing I didn’t count on was how blinding the luminock would be in the low light. Obviously just from my perspective, and not like anything could be changed when the arrow was released, but still… a surprize! She was standing heavy quartering away so the arrow was going to enter behind the ribs, which I felt it did, and was very confident in the shot, until she moved and the arrow looked like it went much further back than planned! Why do we always stress until we have the animal in hand? In the end, it was the Luminock that tricked me. Protruding arrow on quartering away animal just looked far more back than the actual entrypoint.

Either way, I felt the shot was good, and we retreated around the trees to see if we can follow the light of the nock and see where she went down.

Coming around the trees there was no light. Nothing! and only 4 animals… We all assumed the shot was not as good as originally thought, and decided to go pick up the arrow, which we believed must then be lying on the ground close to the impact area. No arrow… and no light, and no sunlight. In the end we took to the vehicles to see if we can see movement (that luminock really does give off a fair bit of light! ) but no luck.

The next morning though, Oom Pieter decided to mark the position from where we need to start tracking, picked up the blood trail 30yds away, and saw the animal 40 or 50yds further, lying in the open. She fell on the Luminock, hiding all light, and we pretty much walked past her!

Happiness! Blessbuck down! unfortunately no beautiful trophy photo, but at least a good memory and a good story to go with her horns that will go up on the wall. 36.5kg carcass means we have a fair bit of meat in the freezer again and my faith in my equipment was fully renewed!

Thanks Archer’s Edge for a perfect setup!